24th 1993. It was feared persons that didn’t have the best interests of the community at heart would acquire ownership and this wonderful site would be lost forever. It had been used for the enjoyment of nature lovers, cavers, walkers and archaeologists for many years.

It was decided to publicise an open meeting for anyone with an interest in the quarry, to be held in the top room of the Tyn y Capel. The meeting was well attended by people with various interests, not least the Wildlife Trust.

Cllr J Edwards chaired the first meeting and a subsequent meeting at the City Arms. 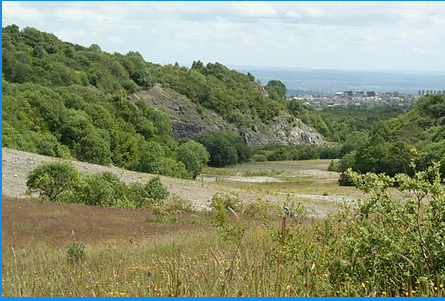 A Minera Quarry Trust (MQT) was formed with Shirley Davies as the chairperson. Applications for grants were applied for and a feasibility study was carried out. In later years, while the MCC still supported the aims and ambitions of MQT individuals did not get involved so that there could not be a conflict between their role as Councillors and members of an organisation seeking support from the Community Council.

In more recent times, NWWT took the lead in negotiations with the quarry owners and are making steady progress with Tarmac.

MCC would like to recognise and commend both MQT and NWWT for all their efforts since the inauguration of the MQT.

Minera Quarry is a disused quarry of c.40ha near Minera, Coedpoeth, Gwynfryn and Wrexham. The site has been associated with the extraction of limestone for over 200 years, with operations finally ceasing in 1994. Parts of the quarry have regenerated naturally and now host many rare and threatened habitats and species, as well as industrial heritage (incorporating banks of disused lime kilns and the Hoffmann Kiln complex: both Scheduled Ancient Monuments) and an impressive system of natural limestone caves.

The quarry’s wildlife today, covered by several statutory designations, includes at least three species of bat (lesser horsehoe, brown long-eared, Natterer’s) and cliff-dwelling birds such as peregrine falcon and raven. Perhaps most important of all, however, is its fabulous plant community, featuring many species specialising in limestone grassland (pyramidal, fragrant and frog orchids, round-leaved wintergreen, autumn gentian, moonwort … the list goes on!). It is this grassland that is most threatened by lack of management: without our intervention, there is little doubt that the already-present problem of scrub encroachment will engulf much of this special habitat if not soon addressed.

NWWT are at an advanced stage of negotiations with Tarmac, Minera Quarry’s current owners, to transfer the land to the Wildlife Trust. Over the last six years, we have worked with the local Minera Quarry Trust (MQT) to try and ensure that the site can be developed into an important community facility. We want to safeguard the site for the future in partnership with local people, transforming it into a true community asset, with access routes and trails around key features; an ongoing series of public events; and of course a programme of essential conservation work including scrub clearance and the reintroduction of long-absent controlled grazing. It is only through the generosity of our members, long-term supporters and committed volunteers that we are able even to consider acquiring new nature reserves – thank you for all you do to help. (November 2016)